The Quant F: 1075 Horsepower and 0 Emissions

The Tesla P85+ is very quick, launching from 0-60 in under 5 seconds. The P85D is even faster than that at 3.2 seconds courtesy of 691 horsepower. However, those numbers pale in comparison to the Quant F. The Liechtenstein born successor to the Quant E is said to be putting out over 1070 horsepower and can achieve 62mph in less than 3 seconds. If driven in a docile manner, the vehicle has an estimated range of 500 miles. The Quant F has “permanent” all wheel drive. The two wheel drive automatic transmission (a first for an electric vehicle) will be pulling electric power generated by a bespoke fuel cell to four individual motors.

There will be one motor in each wheel and two motors per axle. When you really step on it, the front axle disengages and lets the power transfer to the rear wheels. NanoFlowCell AG will be debuting the car next month at the Geneva Auto Show. The design is very interesting as the mid section of the car seems to be elongated and contains what looks like the world’s widest Gullwing door. If the numbers are accurate the Quant F should blow the doors off of any Tesla, including the soon to be upgraded Roadster. Crash testing begins later this year for both European and American markets, pricing has not yet been announced but we expect it to be a limited release car north of $150,000. With a top speed of 186 miles per hour this lengthened Lotus Evora looking electric car beats the Lotus’ top speed of 178mph (when equipped with a manual transmission). 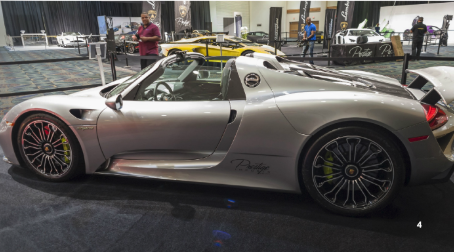 As the warmer months approach, we will expand our fleet Read more